Theory of Mind (or, Remember Other People Have Thoughts and Feelings Too), Part 3 of 3 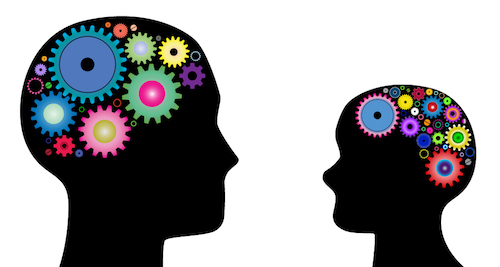 “By not understanding that other people think differently than themselves, many autistic individuals may have problems relating socially and communicating to other people. That is, they may not be able to anticipate what others will say or do in various situations. In addition, they may have difficulty understanding that their peers or classmates even have thoughts and emotions, and may thus appear to be self-centered, eccentric, or uncaring.

Although this is an egocentric view of the world, there is nothing in the theory of mind to imply that autistic individuals feel superior to others.” *

In fifth grade I wanted to grow up to be a Vulcan. Unencumbered by emotion and impervious to the desire to fit in, I would instead rely on pure logic to govern my life. These awful things called “Feelings”? Didn’t need ‘em! Didn’t want them. I practiced raising one eyebrow and saying, “fascinating” when people told me things. I always stood, unsmiling, with my hands behind my back, which made for wonderful class photos. I’m pretty sure I drove my mother bonkers.

I was bullied all the way through school. I was consumed by anxiety and dread every school morning, knowing that I’d only make it through the day by sheer force of will. I remember the cruel words, the shoves, the hard-packed snowballs to the back of my head. I remember the looks, the laughter, and the acid vitriol from a girl who first pretended to be my friend for five months before viciously turning on me. I endured her poison from seventh grade through my first year of college.

That thing adults tell you about bullies? The one about ignoring them so they’ll stop? It doesn’t work. Once you’re their target, ignoring them only makes it worse. They want a reaction. They want the power to make you react. I continued to follow the advice of the adults and ignore it, being a model Vulcan, and the bullysphere grew larger. Other kids started to join in, emboldened by the Head Bully.

By my own logic, without the benefit of Theory of Mind, I must be doing something to cause the bullying. I began to believe them when they told me I was stupid, fat, and ugly. I wouldn’t lie to them, so they wouldn’t lie to me, right? Their words cut me to the bone, but Vulcans don’t have emotions, so I did what any Vulcan would do and showed no emotion. It made no difference.

By the time middle school rolled around, my efforts to become Vulcan had finally paid off. My daily interactions with other people were emotionless. My feelings were carefully boxed up and buried deeply within an internal “warehouse” of sorts. Each morning, I donned a metaphorical suit of armor before leaving the safety of my world. My warehouse of emotions was like the final scene in Raiders of the Lost Ark, with boxes and boxes stretching on forever, only much tidier. My boxes were sorted neatly upon shelves. It’s a strange sensation, memories without feelings and feelings without memories. I could clearly remember the girl that pretended to be my friend. I remember the vicious delight in her blue eyes as she stood in the hallway and ground me under her heel with words carefully chosen to pierce my heart. I know she hurt me deeply, my joy at having a new friend shattered. Though I could see that moment clearly in my mind, I could feel nothing as I watched the memory play. The feelings would come later, when I was alone. Tears streaking down my face as I cried myself to sleep. Grief, loss, and anger at myself for being so stupid as to trust her, yet knowing I’d probably do it all again for the chance to make a new friend and feel like a regular kid. In that moment in the hallway, however, I simply stood there and took her abuse. Her words washed over me, but I gave no reaction. It was as if I didn’t care, my face carefully blank. She finished and awaited my reaction.

I raised one eyebrow at her and replied, “Fascinating”.

Her face flushed dark red. Before she could unleash a blistering retort, the class bell rang. I turned on my heel and strode off, seemingly impervious to her words. To the world, I looked completely uncaring. In reality, the feelings inside me were too huge to cope with. I didn’t even look at them. I stuffed them all into a box and locked the whole works in my warehouse.

The “feelings warehouse” is not a viable long-term solution. Feelings need to be worked through and understood. Other people’s points of view need to be talked about and put into terms we can understand. We need to experience, name, and work through emotions. Leaving them festering only hurts us.

I never understood what drove the bullies in my class. I still don’t. I’ve been told that putting other people down gives them a sense of power and control. How miserable must they have been? Probably as miserable as I was, but for different reasons. I don’t understand how hurting me would’ve made them feel better. I bear the scars of their misery, but I shouldn’t. No one deserves that kind of malevolence.

I never felt superior to other people. As a Vulcan-in-training, I acted superior to others because I was going to be a Vulcan. Cool logic and rationality are always superior to knee-jerk reactions and gut feelings, right? But acting superior and feeling superior are two very different things. Acting superior is armor against a world that is often baffling, painful, and frustrating. How could anyone feel superior when we endure bullying, discrimination, and repeatedly hearing the message that we need to be “cured”?

Our most vulnerable need us to guide them. We need our parents and family members to make a safe place for us to talk about what’s happening inside us. Emotions swirl so quickly that they’re here and gone before we can even identify what they are. We need someone we can trust to help us make sense of what we feel so we don’t need to put on armor and bury our feelings. We need acceptance for who we are right now and encouragement to become our best selves.

As I entered adulthood, I worked my way through the dreck in my warehouse. Left untouched in the dark, the boxes had started to seep. I slogged through them, pinning feelings to memories and working through them. Anger was named for what it really was: fear or disappointment. Getting to the core emotion makes it so much easier to deal with. It’s an ongoing process, this emotional integration I now have. Sometimes I need more processing time to really figure out what I’m feeling, and sometimes I don’t. I experience more stress than I used to, but I believe it’s for the better. I can only control myself and that’s all the control anyone really needs. I control how I react to situations. I control what feelings I choose to dwell on or not. It’s a conscious choice, action instead of reaction. I spent so long reacting that I never realized that I could choose to act instead. Once I embraced that, life became so much more manageable. It’s not perfect, because nothing ever is, but I’m more present in my life instead of lost in my own head. I’m not responsible for anyone but myself. I care about other people and want them to be happy, but I’m not ultimately responsible for their emotional well-being. I’m responsible for mine, and that is enough.

– As always, the thoughts and opinions expressed in this post are my own and do not necessarily reflect the experiences or opinions of others on the Autism Spectrum and/or Mind Shift.